by Jon House and Simon Carlyle

Prior to the construction of new homes by Rose Builders (Properties) Ltd on a plot of land off Nun’s Walk, Great Yeldham, Pre-Construct Archaeology was contracted to undertake an archaeological investigation of the site. The scope of the investigation was agreed following discussions between RPS Group, the developer’s archaeological consultant, and Place Services at Essex County Council.

At the outset, little was known about the site’s archaeological potential, although its location next to the Whitlock’s Estate, where a possible prehistoric pit and worked flint had been discovered in the 1990s, suggested that remains of a similar date could be encountered within the site. It has also postulated that parts of the A1017, which passes the site directly to the east, follow the route of a Roman road, although this has not been confirmed by excavation and its route through Great Yeldham is unknown.

So, in March 2021, an initial stage of trial trenching was undertaken by Pre-Construct Archaeology, which uncovered remains dating from the Mesolithic/Neolithic, Iron Age and Roman periods. Informed by these results, it was therefore decided that a second stage of fieldwork should be undertaken, consisting of three excavation areas, to further investigate these remains. The excavation commenced in August 2021and was completed in five weeks. 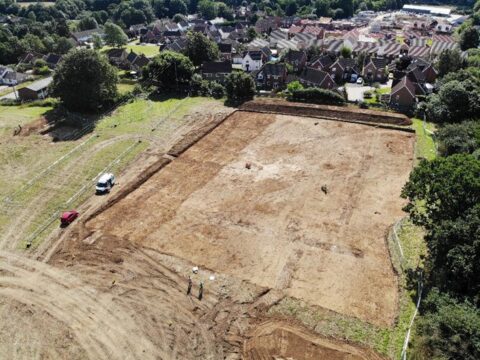 The Mesolithic/Neolithic remains encountered by the trial trenching had consisted of a shallow, subcircular pit or natural hollow, c. 1.3m in diameter and 0.05m deep. It contained 45 pieces of flint showing evidence of having been worked, including a bladelet core of Mesolithic/early Neolithic date (very broadly 8000–3000 BC). The pit also contained fragments of animal bone, charcoal and a few charred cereal grains. For the excavation, the site of the pit was relocated and the surrounding area was stripped by machine to determine if the pit was an isolated feature or part of a feature group. No further pits or hollows were encountered, but a buried soil layer was identified that contained additional pieces of worked flint of a similar date. This suggests that this location had been used opportunistically on at least one occasion by a passing band of hunter-gatherers as a place to fashion flint tools. The site may have been chosen as it lies close to a stream and the local gravel geology would have provided a good source of flint pebbles suitable for knapping.

Following the visit to the site by the band of hunter-gatherers, many millennia passed by before humans again left an imprint on the site. This was in the Late Iron Age (100BC to AD 43), when several ditches were dug on the plateau of higher ground in the south-west corner of the site. These ditches would have formed part of a more extensive ditch system that formed the boundaries of fields belonging to a nearby farmstead. Few pottery sherds or other finds dating to this period were recovered from the ditches, indicating that the farmstead was located a little way from the site.

The peripheral location of the ditch system to nearby settlement was emphasised by the discovery of a group of cremations that probably date to the very end of the Late Iron Age, to the years preceding the Roman invasion in AD43. Several of the cremation pits were furnished with grave goods, including fineware pottery vessels and a Chatelaine set, a belt adornment that was typically presented to Roman girls as a ‘coming of age’ gift. The range of grave goods suggests that the people buried here were moderately prosperous and had access to local markets supplying Roman goods in the years before the Roman invasion. 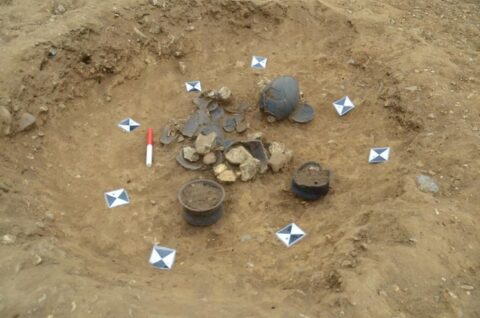 Grave goods in one of the cremation pits

Around the middle of the 1st century AD, perhaps in the decade immediately following the Roman invasion, the area of the Late Iron Age ditch system and cremations was re-organised This re-organisation may have been associated with a change in land ownership, as no attempt was made to respect the location of the cremation cemetery and the new ditch system was set out on a different alignment to the old. The new, rectilinear ditch system was established on a north-south/east-west axis, forming paddocks or enclosures, probably for corralling livestock. There was little evidence for domestic occupation within the site, although a number of pits and postholes within the area may be associated with agricultural activities. However, several of the ditches contained relatively sizeable assemblages of Roman pottery and a small Roman knife was recovered from one feature, suggesting that the ditch system lay close to an area of occupation, probably to the south or west of the site. In the western corner of the site two large Roman extraction pits were investigated (probably dug for clay), which were up to 30m in diameter and up to 2.4m deep. This part of the settlement appears to have fallen out of use in the 2nd century AD.

The process of examining the results of the excavation is currently underway and will be reported on in due course. The excavation has provided a great opportunity to learn about Great Yeldham’s distant past, in an area that has seen limited detailed archaeological investigation.

Pre-Construct Archaeology would like to thank Rose Builders (Properties) Ltd for commissioning and funding the work, Nick Cooke of RPS Group for appointing PCA to undertake the excavation and Teresa O’Connor of Place Services at Essex County Council for monitoring the work and providing archaeological advice and guidance. Thanks is also given to the field team for all their hard work and their determination in digging some tricky features that weren’t always that easy to see!

You can find out more about which cookies we are using or switch them off in settings.

This website uses cookies so that we can provide you with the best user experience possible. Cookie information is stored in your browser and performs functions such as recognising you when you return to our website and helping our team to understand which sections of the website you find most interesting and useful.

Strictly Necessary Cookie should be enabled at all times so that we can save your preferences for cookie settings.

If you disable this cookie, we will not be able to save your preferences. This means that every time you visit this website you will need to enable or disable cookies again.